I got the Polyethylene Terephthalate Summertime Blues 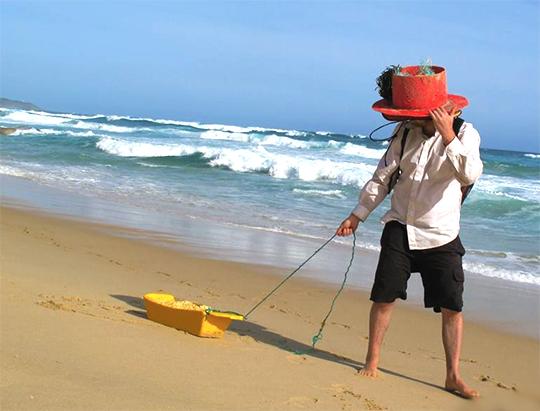 Ah summer, my sweet sweaty friend. My barefoot companion and sunny soul mate. How sandy your shores, how salty your sea. How colourful the plastic debris, a-washed upon your periphery.

Of all the poems inspired by summer – capturing the way it beckons us outdoors and the sense of freedom it brings – I've yet to read one that includes an ode to plastic pollution. But as I walk along Australia's south eastern coastline I get the impression we've accepted this scourge as an inevitable and barely noticed part of our travels. Unsightly but benign. Something you pretend you didn't see, like a booger peeping out the nose of your companion.

Because it's there on every beach. And I didn't see people on the pristine and fairly remote coastline of Croajingolong National Park spotting a plastic bottle or tin can, screaming, “oh my god, a reptilian death trap! Bird poison! Whale catastrophe!” and running to hasten its removal. I saw them turn their heads and delete it from their picture post card memory.

More curious still is the reaction you get from people when you do the deed yourself. While picking up shiny plastic bits and water bottles (always water bottles!) from Gillard's Beach in Tathra, one person stared at me curiously for several minutes before enquiring if I was a local, as if the trash became magically accessible to only those who lived within a 5km radius. Another was so mind-boggled they first had to confirm that I was indeed collecting rubbish (“Not at all! Clutching dirty crap is how us southerners enjoy a beach stroll.”). “Yes,” I said. “Good on you, no really, good on you,” said the fellow with such conviction, it makes you wonder what psychological Himalayan impasse prevents such a caring individual from popping over and collecting a spot of surplus civilisation themselves.

In truth, I don't understand at all how people can just walk over rubbish, especially on a relatively remote beach like Croajingolong's Clinton Rocks where the incursion of human refuse looks most perfectly wrong. When the glisten of tin or an unnatural hue catches my eye, my brain switches into terminator mode: “Target identified. Must eliminate.” At first this compulsion felt ruinous of many a relaxing outing – filling a canoe full of slimy dripping plastic bottles during an enchanting paddle down Yarra Bend comes to mind.

But with practice comes acceptance and now, reclaiming people's rubbish has become an intrinsic part of our relationship – nature and mine – an unbreakable pact whereby nature agrees to be spectacular and I agree to remove our poxy mess from amongst nature's skirt tails whilst apologising for my embarrassing species.

It's been a while, but perhaps I can remember when I didn't think the rubbish had anything to do with me (because I didn't put it there) and so picking it up was not my job and would actually make me look like a big weirdo. Once packaging leaves our hands it transforms into something untouchable; only desperate destitute people dare commune with it again. When we're kids we're constantly told to stay away from “dirty” things. If it's so toxic and prone to escape the disposal process, perhaps we should try not to wrap it around stuff in the first place.

I'm talking about plastic packaging more than anything else, because what changed my approach to rogue rubbish and a fact I find simply astounding is that every bit of plastic ever made still exists on earth. And always will. Whether it’s wafting along a beach or buried in a big hole (creatively known as The Tip) it's here to stay. Forever. And we're still making more.

Plastic needs light to break down at all, an element truly lacking under the ground. Even when the light works its magic, it only breaks plastic down into little pieces. This is what happens to plastic in the sea, which is terrible news for the sea creatures who eat it. If you've not seen Chris Jordan's haunting photos of dead sea birds or read the news reports of whales that have gulped down tonnes of plastic I dare say they will invigorate your next walk along the beach.

Paul Sharp from the Two Hands Project reckons inaction lies in the fact that people think of rubbish as litter rather than pollution that kills. In reality our wildlife eats it, gets tangled, restrained and mangled, suffocates and chokes on it. In short, we've turned their habitat into Lady Hellfire's Den of Anguish with no safe word.

Being a pragmatist, I see that the only solution is to immediately cease production of commercial plastic (they can still make it for life saving technology, and Keepcups, maybe). In the meantime, Two Hands Project is kindly pointing out to us all that, as we have two hands, we are allowed and able to pick up rubbish ourselves. In just three year's Two Hands has attracted over 40,000 followers and encouraged countless people around the world to not only rid their beach of rubbish, but post scandalous photos of themselves doing it on the net. Like this one:

Two Hands are also developing prototypes for reusable packaging for use on an industrial scale, and tormenting companies like Coke into taking responsibility for all the rubbish on our beaches that they have manufactured – beginning with requesting that the company cease legal and other action against container deposit schemes (the ones where you get 10c if you return a plastic bottle to a recycling point). That's right Coke is trying to destroy a proven rubbish return system. Enjoy that.

What I'm going to do next I think is start a Change.org petition asking Parks Victoria to put a sign at every beach – not the boring old one saying Please don't litter, but a new one with a five foot picture of a dead baby albatross's guts spewing plastic saying Have you no eyes? Have you no heart?? For pity's sake, see the plague all around you, pick up that Mount Franklin, pick it up! Rid our shores of this pestilence. Save the sea creatures or dam us all. Or perhaps we could try this one first: Plastic harms our wildlife. If you see some rubbish, pick it up. If you see someone drop rubbish, give it back to them. (tiny legal disclaimer citing possible OH&S risks below). Then we'll work on getting rid of rubbish from the rest of the land.

What you can do next if it so takes your fancy is: