May The Force be with you – the power of divestment 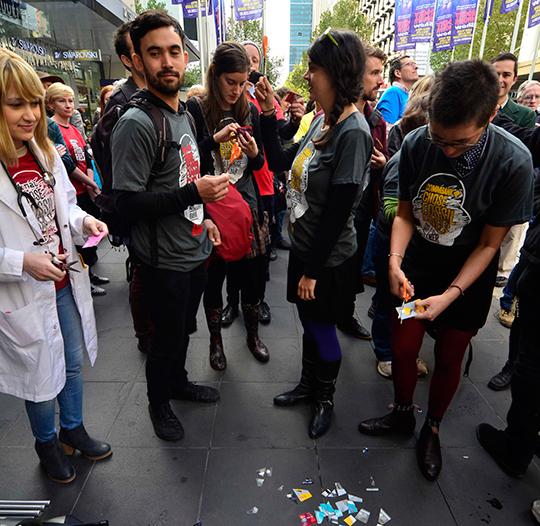 Ever stopped to consider how your hard earned cash might be assisting the expansion of the fossil fuel industry? Market Forces is a grassroots group storming the Australian divestment scene. Divestment campaigner Govind Maksay tells us how our filthy lucre can be a force for good.

Here is the bad news first (don’t worry a solution is coming): if you bank with one of the big four Australian banks (ANZ, Commonwealth, NAB and Westpac) your money is helping finance new coal and gas projects in Australia. Luckily there are lots of alternative banks you can easily move to if you want to clean up your personal finances. Switching banks is an extremely powerful action you can take to protect our climate and it's one that's gaining momentum.

Market Forces was established in 2013 to reveal how financial institutions use our money to finance environmentally destructive projects and help people align their money with their values. Our research has revealed that since 2008 ANZ, Commonwealth Bank, NAB and Westpac have collectively invested almost $19 billion in new coal and gas projects in Australia.

Many of these projects are in controversial areas such as Maules Creek in New South Wales and the Great Barrier Reef coastline. Significant parts of the Leard State Forest, which is home to more than 30 threatened species, need to be cleared to make way for the Maules Creek coal mine.

The proposed coal port expansions within the Great Barrier Reef World Heritage Area have prompted the World Heritage Committee to warn the Australian Government that the area will be placed on the List of World Heritage In Danger, giving them 12 months to clean up their act as of June 2014. Simply put, the banks are using our savings and the interest we pay on personal loans and mortgages to expand the fossil fuel industry precisely at the time when we need to kick the fossil fuel habit.

Obviously, when you invest in an industry you want to see it succeed and prosper. By investing in new coal and gas projects the big four banks want the fossil fuel industry to succeed. They want to see lots of coal and gas extracted and burnt and healthy profits returned to them. The question we need to ask ourselves is if this vision of the future is one we want to support with our money.

Well that is the problem. Now let’s turn to the solution. For the last year Market Forces, in conjunction with 350 Australia, has run a series of bank switch divestment actions targeting the big four banks. These actions have formed part of the broader fossil fuel divestment movement. Divestment is simply the opposite of investment - it means taking your money out of institutions and companies that you no longer wish to support.

The bank switch divestment actions have consisted of hundreds of customers of the big four banks publicly closing their accounts and switching to banks that have publicly declared they are not investing in fossil fuels. On 3 May 2014, we organised our largest ever national divestment day during which over 600 customers turned out. The amount of business shifted away from the major banks has been reported at over $200 million.

People have found taking part in these events inspirational. There is something very powerful about aligning your money with your values and doing this in a public manner. Customers have enjoyed cutting up their old bank cards, personally delivering letters to the banks informing them why have switched and meeting like minded people.

According to the University of Oxford, the fossil fuel divestment movement is one of the fastest growing divestment campaigns in recent history. We have already had some great success internationally and in Australia. Recently, Bendigo Bank, Australia’s fifth largest bank, released a strong statement outlining that it will not “lend to companies for whom the core activity is the exploration, mining, manufacture or export of thermal coal or coal seam gas.”

Many smaller banks and credit unions have also made similar public statements and have contacted Market Forces asking to be added to our banks comparison table. In May and June, three large international banks (Deutsche Bank, HSBC, and Credit Agricole) publicly declared they are extremely unlikely to providing funding to the controversial Abbot Point coal port expansion, given the World Heritage Committee’s concerns over its impacts on the Great Barrier Reef World Heritage Area.

So simply put, the fossil fuel divestment movement is having a tangible impact and it is a great time to get involved. The response from the fossil fuel industry clearly demonstrates it feels under threat. In April 2014, the Minerals Council of Australia (MCA) launched a campaign called Australians for Coal aiming to promote the case for coal and develop a grassroots movement supporting the coal industry (this backfired spectacularly when climate activists took more enthusiastically to the Twitter hashtag #australiansforcoal than coal supporters - Ed).

The MCA has also been actively lobbying investors and superannuation funds about why fossil fuels are still a good investment.

Market Forces has done a whole lot of work to make switching banks and cleaning up your personal finances as simple as possible. Market Forces bank switching resources include:

To date, hundreds of people have switched away from the big four banks and the campaign is having an impact. We need more people to join and help grow this movement.

Will you make the switch and ensure your money is creating a hopeful vision of the future? A future in which we are addressing climate change and the world is powered by renewable energy rather than dirty fossil fuels.

Govind Maksay is a campaigner at Market Forces. He has worked with environment organisations for nearly 10 years and has a background in residential energy efficiency research. Govind decided to get involved with the fossil fuel divestment movement because of its potential to bring about significant action on climate change.