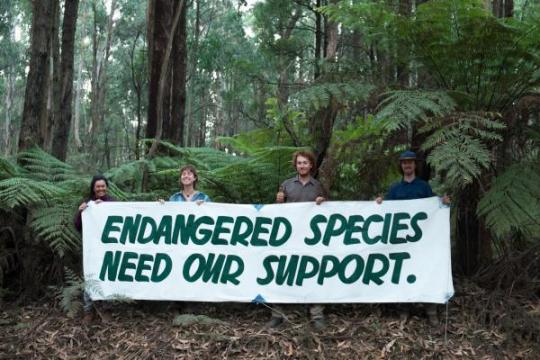 Community group Forest Conservation Victoria (FCV) have returned for the second week in a row to halt logging operations in high-conservation-value forests in Toolangi, north east of Melbourne. The Castella forest block where logging started last week is home to the critically endangered Barred Galaxias fish as well as Koalas and the nationally vulnerable Greater Glider.

A community conservationist is suspended within a tree-sit platform 30m above the forest floor, attached to logging machinery to stop further clear-fell logging in the area.

Last week it was reported that the Daniel Andrews Labor government delayed signing off on a new native forest Timber Release Plan (TRP) that would allow access to more areas of native forests for logging. The government cited wide-ranging problems of the logging industry but made no commitment to shelve the plan entirely.

Christine Schuringa from FCV said, “the government must acknowledge the environmental value of these forests and the importance to the community that they are protected. Eventually the government must decide what the true value of Victoria’s forests are to be, an environmental wasteland or thriving ecosystems with complex biodiversity values. The signing of any new TRP will drive our forests into the ground and cause irreversible localized extinctions”.

“Already we’re seeing across the landscape that these intensive operations are now almost exclusively taking place in threatened species habitat, pushing our unique Australian wildlife further towards extinction,” she said.

Earlier this year citizen scientists discovered a new population of the endangered Barred Galaxias fish within the logging coupes and recommended the forest supporting the fish be protected for generations to come. Despite this, Environment Minister Lily D’Ambrosio is allowing the logging operations to destroy known Greater Glider habitat and threaten the newly discovered Galaxias population.

A leaked report commissioned by a forest industry taskforce and put together by the government’s own Arthur Rylah Institute stated that the protective stream buffers for the critically endangered Barred Galaxias fish were insufficient because they wouldn’t “adequately prevent or minimise sediment input into streams or limit access to streams within coupes”.

“While the government have committed time, money and effort into trying to save the species from extinction after the devastating 2009 Black Saturday fires, they still refuse to ban logging in the fishes' habitat and we stand to lose this population that has only just been discovered,” said Jake McKenzie from FCV.

Nearby residents who don’t want to see these forests destroyed have organised another peaceful protest for the protection of this special patch of forest this coming Sunday. This will highlight the significance of these forests and the impacts to local farmers whose farms are adjacent to the logging coupes.

“VicForests’ logging operations plan shows that 76% of the logs will be pulped for paper production. This is a shocking waste of iconic Victorian mountain ash bushland that belongs to all of us,” said community member Sue McKinnon.