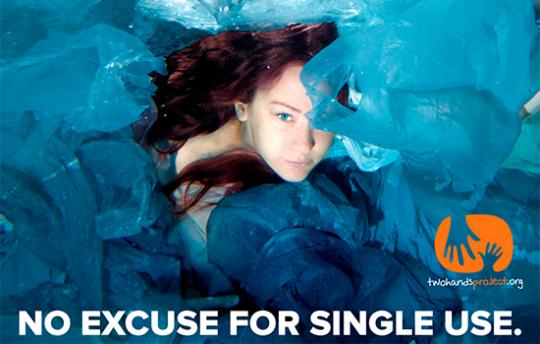 Paul Sharp has changed the way people think about plastic pollution all over the world, and he's done it with little more than his own two hands. So what's the secret of tiny groups making a massive difference? Is it time for peak groups to take a masterclass in back to basics?

After a moribund start in in the 1800s, Australia's environmental and social conscience kicked off on a grand scale with the mass public protests of the 1960s.

Tactics quickly evolved and diversified to incorporate banner drops, green bans, boycotts and blockades. Environmental organisations like Friends of the Earth and The Wilderness Society emerged to provide a framework for organisation, translating community concern into social and political force.

In this form, the environment movement made huge conservation gains and succeeded in the mainstreaming of kooky and extreme ideas like saving water, putting rubbish in the bin and recycling.

Today environmental organisations must constantly test out new angles to maintain traction on an eroding, slippery slope. According to polling (and Google search history), environmental motivation is on the decline. No one's searching best anti-nuclear placards any more. Add to this the thundering winds of change unleashed by the internet, and the tried and tested methods that form the foundation of environmental campaigns have an ever steeper hill to climb.

So how do they make it look so easy – the Two Hands Project?

About three years ago Paul Sharp and Silke Stuckenbrock got fed up with plastic pollution along their beloved Western Australian coast. Aiming high, they began to campaign for a global reusable container system to replace disposable packaging, and a “cash for butts” scheme to deal with the omnipresent curse of cigarettes. But they weren't going to wait around for the results, they wanted to demonstrate the immediate power of their own two hands.

In this short amount of time, with no significant funding, no staff or infrastructure, Two Hands has attracted an online following of 36,000 plus, created collaborative projects across the country with a bevy of small community groups, partnered with Tangaroa Blue to record and research plastic waste collected, held actions at corporate headquarters returning rubbish, and emboldened tens of thousands of people from Egypt to the Netherlands to spend 30 minutes cleaning up their beach, take a photo and share the results.

The tonnes of rubbish removed from the environment because of Two Hands is unquantifiable, although Paul gives some indication of the reach a small group can have. He was inspired to start the project after clearing 3 tonnes of trash from Sydney Harbour in just three months worth of weekends with Eco Divers volunteers.

“It opened my eyes and showed me that small local groups can be extremely effective. I thought, this is an idea that needs to be spread. I want to get the job done in my backyard and show people that they can do it where they are.”

Two Hands have no problem attracting traditional media, featuring on 7 News, in The West Australian and Gardening Australia magazine. Less traditional methods of exposure include manipulating Coca Cola's personalised billboard in Kings Cross that for a time would flash your name in lights if you texted it in. The names Tencent and Refund replaced the more common Amanda and James when Two Hands used this platform to subvert Coke's opposition to a national container deposit scheme.

In August, the Two Hands crew sailed the east coast to sample for ocean plastic, inviting people from coastal communities along the way. With an eagle eye on the big prize, they are working with industrial designers to develop a prototype for mass market re-usable containers.

Paul is very modest about the role Two Hands plays in the environment movement. He sees it more as a catalyst for action on plastic pollution than a formal organisation or campaign.

“It's something that's been happening in one way or another for decades. We made a few connections with viewing plastic rubbish as pollution, and viewing it as a design based problem rather than just a litter problem. We tied it in with social networking and photo sharing of clean-ups to inspire people and build community – we were the first to think of using photos of trash as a means of inspiration.”

“But in reality it's not really us inspiring other people, it's people seeing what the community is doing and getting inspired. The broader idea is, you can take your two hands and apply it to anything in your own community that needs fixing; it can be social, environmental, anything at all.”

A quick browse through the Ecoshout Active groups directory reveals the diversity of groups campaigning for social change today. The thing the most effective and longstanding groups share is how much they love what they're doing and how good they are at telling you about it. In other words, it's blatantly obvious they're all having heaps of fun. Just check out the pictures on the Two Hand's Facebook page – hundreds of photos of people sitting behind piles of rubbish, flashing twinkle fingers.

“One of the most fun things is having random engagements,” says Paul. “We're always out on the ground cleaning up. Kids jump in, sometimes to the shock and horror of their parents.”

It was a kid that really brought it home to Paul that things weren't right in the first place and made him want change. He was sitting on the beach watching a girl making a sand castle. She was having great fun. It was a simple, beautiful site. Then Paul realised she was decorating her creation with bits of rubbish collected from around her, where in his childhood he would have reached for rocks and shells.

"It's become so normal for kids, they see pollution as part of their environment, they barely notice it. For adults, its seen as mainly an aesthetic problem. We're trying to change the perception that plastic is litter. It's pollution and it causes big problems for wildlife."

It's clear that social media has given small groups communication power they could only have dreamed of before the internet. Two Hands are adamant that their success lies not in being experts in plastic waste, but in how they communicate the change they want to see and how they engage with people.

“The most important thing is community,” says Paul. “ Acknowledgement and support, giving shout outs. It's about collaboration, we shouldn't be competing. We need to support everyone do what they're good at.”

Above all, Paul wants us to know that this extraordinary group is nothing special. Paul wanted to see change, he joined in with existing projects and got inspired to do what he could with his own two hands – and did it.

“I don't see us as environmentalists,” says Paul. “I don't even see us as activists, we're just part of the community.”