What does 26 January mean to a 22 year old Gunditjmara Kirrae Whurrong woman? 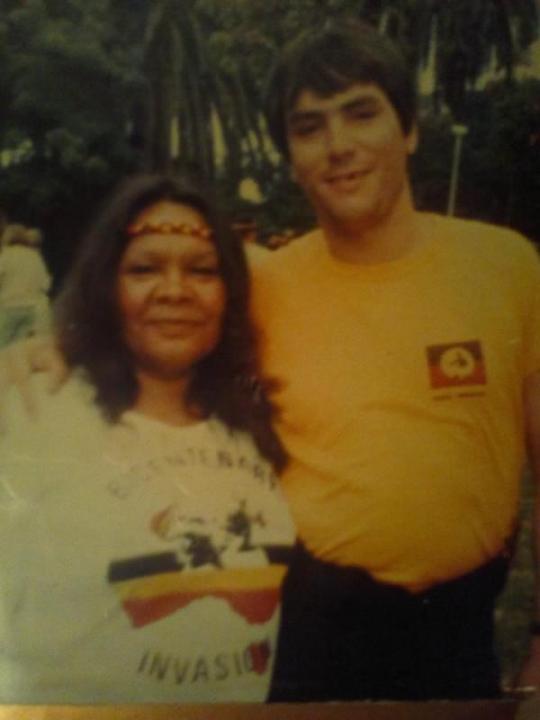 Gunditjmara Kirrae Whurrong woman Sissy Austin was born in 1994, the year that 26 January became a public holiday in Australia. Here she describes how it feels to witness the annual celebration of the day, 229 years ago, when this land was declared 'nobody's land' and stolen from her people.

Every year in January I get this sickening feeling, I feel like my heart is sinking into the ground, dragging along behind me to get through the days leading up to and following 26 of January, the sleepless nights knowing that in only a few days thousands of people will be flying their meaningless flag, shoving their faces with sausages, sculling alcohol whilst laying in a pool under the sun listening to the Triple J Countdown, whatever it is called.

Meanwhile as an Aboriginal woman, I am feeling intense feelings of internal anger, grief and loss. If I could explain what intense internal anger feels like I would.

I find myself sitting at my work desk with silent tears rolling down my face, with headphones in playing my Uncle Kutcha’s song, Is this what we deserve, which states “we been here since time began, our ancestors footprints are buried in the sand, we are but caretakers of this ancient land, but you still don’t understand”. I am saddened that this song was released in 2007, ten years ago, and we are still asking the same question: is this what we deserve? We know we don’t deserve this, but do you? > Watch Uncle Kutcha's song

In 1988, Aboriginal People lead a gathering/march in Sydney and marched from Redfern Park to Hyde Park and then onto Sydney Harbour to signify survival. The photo at the top of this article is of my father and my nana at this event.

The photo for me tells a thousand stories, it is survival, it is hope and it is determination.

My father is a member of the Stolen Generation and was removed from his family when he was 15 months old. He was made a ward of the state until he was 16 years old. For 16 years my father was shuttled between institutions and foster parents while my Nana Eileen Austin wrote repeatedly to the state government seeking the return of her son.

Can you imagine living 16 years not knowing of your true identity as an Aboriginal man? Can you imagine a mother, writing to the state government for 16 years trying to find out where her son was? Can you imagine, being given over five different last names and having to adapt to each one and each different family's values and beliefs?

And then connecting with your true identity and coming to the conclusion that you’re a part of the oldest continuing culture in human history? Discovering that you’re a decedent of a culture that has cared for this country for thousands of generations? That your identity isn’t defined by the 16 years of genocide you have become a victim of, yet it is defined by your creator, Bunjil, it is defined by strong cultural and spiritual connections to country and defined by values of respect, authenticity, knowledge, loyalty, wisdom and trustworthiness.

My father was eventually released from the system at the age of 16. After a long journey he finally tracked down his mother Eileen Austin. They spent eight years together before she passed away in 1989 - one year after the above photo was taken.

In 2011, my father became the first Victorian Aboriginal man to receive compensation and a written apology from the Victorian Government due to poor treatment as a member of the Stolen Generation. Dad described this case as “It’s one for Mum. It’s a great acknowledgment and a salute to a mother who never gave up loving me”.

Why do I find myself sitting at my desk at work with tears rolling down my face? Because I am tired yet I am determined. I feel poor, yet I feel rich. I feel anxious. So anxious at the thought of thousands upon thousands of people celebrating on the day my peoples' country was declared terra nullius. This morning I went into the petrol station to pay and the Australia Day merchandise caught my eye. I feel like my heart is consistently jarring.

Should I book myself an appointment with a non- Indigenous counsellor to help me? Should I risk talking to a professional to then find myself educating her/him leaving me feeling more traumatised than before? Will this actually happen? I don’t know. I don’t know but the anxiety of the thought of this is debilitating enough. So instead I am writing.

The 26th of January is a Day of Mourning. I will always mourn alongside my Brothers and Sisters, Aunties and Uncles. I mourn the peoples whose lives were violently taken in massacres. I mourn for those who were sent to prison camps, forced to live in reserves. I mourn for the culture we have lost. I mourn and I long to speak my own language. I will forever cry for our women and children who were raped, massacred and tortured at the hands of government and churches.

I am not just a young woman, I am the grandchild of Eileen Austin and the great grandchild of Doris Clarke and William James Austin. I come from a culture of survivors, of fighters and a culture of respect, integrity and selflessness. I am a daughter, a sister, an aunty and a cousin.

It is 12 January today, I can only imagine that myself and my brothers and sisters feelings are only going to get worse as each day draws closer to this traumatising day in our calendars. But together we must stand strong in solidarity. We must stand taller for the 15,455 Aboriginal and Torres Strait Islander children in out of home care*. We must march stronger for the 9,885 Aboriginal and Torres Strait Islander people who are currently incarcerated** and we must yell louder for those that are not yelling with us, for they have either left us for the dreamtime or they’re so severely affected by the countless mental and physical illnesses our people suffer from, leaving their voices unheard.

Our pain and our suffering is not limited to 26 January. The fact that Australia celebrates being Australia on this date is representative of something larger than just that. Changing the date will never change the fact that as of 1788 this country was built, and continues to be built on layers upon layers of genocide.

It is your decision on how you chose to think and act.