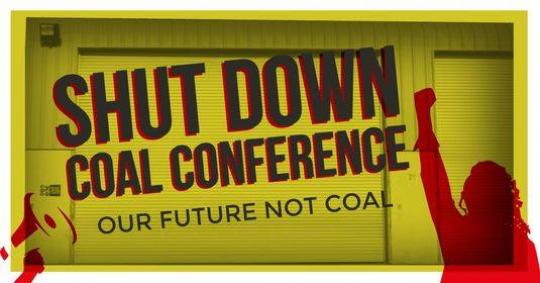 Organised by an alliance including Health on the Frontline, the Australian Student Environment Action Network and Faith in Climate Action and members of the Ipswich community.

We have had confirmation from the University of Southern Queensland Vice Chancellor’s office, the conference organiser and the Ipswich police that the 2021 Coal Conference will no longer be held at USQ on Feb 10-12. Woo Hoo!

Earlier in January, the organisers made the conference website private: http://www.coaloperatorsconference.net.au/about2021 with no explanation and no way to register online for the event.
Although increasing COVID-19 health restrictions would have played some part in their decision, we believe that having no way of registering online indicates the organisers have responded to our planned protest by running scared! They have removed public registration for any online versions of the conference in order to avoid public scrutiny and community opposition.

After your numerous emails to the conference organiser and an invitation to our blockade training day a recent conversation with him confirmed they were well aware of our plans and were not happy about it!

So congratulations everyone! Together we have demonstrated to a dying, toxic industry that there is no place for any more coal in our future! Bring on the clean energy revolution.

We have called off the protest planned for the USQ campus in Ipswich on February 11 as there will be no event on site. However, We’re still investigating if the conference is in fact going ahead online and will keep you posted about future actions. You can follow Extinction Rebellion Ipswich page for any updates: https://www.facebook.com/IpswichXR

Professor Naz Aziz, 046 661 3184 letting him know that coal is burning our collective futures and University resources should not be spent on promoting or supporting the coal industry.
----------------------------
Coal2021, the Coal Operators Conference* is planned for 10-12 February next year at University of Southern Queensland Springfield Campus in Ipswich.

This mine managers conference is purely about coal - how to dig it up and burn it more efficiently. It was planned to be held at the University of Wollongong, NSW in January, but was forced to shut down due to successful protests from the Illawarra community.

Now conference organisers have moved the event to Queensland, and the outer suburbs of Ipswich in an attempt to avoid public protest and scrutiny.

The mining and burning of coal is Australia’s largest contribution to the climate crisis. To have any chance of a safe, livable future, we need to be phasing out coal production, investing in renewable energy alternatives, and striving to be at the forefront of new coal-free metallurgical technologies.

Join the People’s “Our Future Not Coal” conference - a vibrant, staunch, community protest against the 2021 Coal Conference. Send a message to the coal industry - Queenslanders don’t want more dirty coal that is driving the climate crisis, hurting communities through extreme weather and drought, and putting all of our futures at risk.

Our aim is to shut down the conference and spark intense community outrage which makes the conference unable to proceed. We will be holding an alternative People’s conference to give a voice to communities impacted by the climate crisis and talk about the need to move beyond fossil fuels.

We need to make this event as big as possible to send an early message to conference organisers before too many tickets have been sold. Please share this with your friends and networks to demonstrate widespread community opposition to the conference.

We’re kicking off early to stop people entering the conference, but the event will run all day so come when you can and follow the Facebook Event for updates!
* For more info visit the conference website: http://www.coaloperatorsconference.net.au/about2021

** Leaders and Legends: Thousands of clean jobs for Queenslanders, Climate Council Report. http://www.climatecouncil.org.au/.../leaders-legends.../
This is being hosted by an alliance of organisations including Health on the Frontline, the Australian Student Environment Action Network and Faith in Climate Action and members of the Ipswich community.