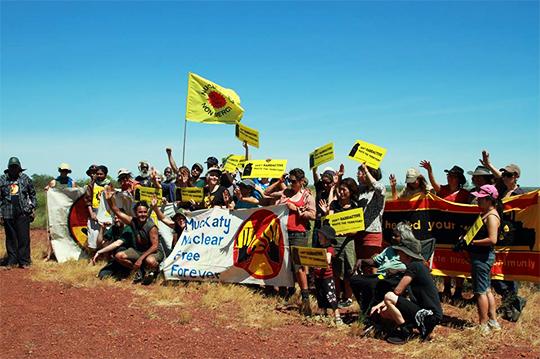 This June the Radioactive Exposure Tour will travel almost 5000 kilometres through three states exposing people to the reality of radioactive racism, the impacts of uranium mining, radioactive waste and nuclear expansion. Jemila Rushton reports on her first Rad Tour in 2014 and what's coming up this year.

The Radioactive Exposure (Rad) Tour sure is a wild ride. It bundles activists, campaigners and basically anyone with an interest in learning about the nuclear industry into buses powered by recycled vegetable oil to travel dusty desert roads and long highways on a journey through Australia’s nuclear landscape.

Organised by Friends of the Earth's Anti Uranium and Clean Energy (ACE) Collective, the Tour is not just about bush camping, fireside yarns and spectacular country (although you do get all that!). Its true purpose is to provide a vital opportunity to build community and develop creative campaign strategies for the most pressing nuclear issues.

We gather campaigners from across the country, meet with Elders and Traditional Owners who have for too long experienced radioactive racism on their lands, and connect with communities set to be most affected by nuclear activities. We listen, we learn, we collaborate.

The Rad Tour is always changing; each year we design the tour in line with current environmental and political concerns. Last year the Tour travelled from Melbourne to Muckaty in the Northern Territory to meet with Traditional Owners campaigning to stop a waste dump being built on their land. After discovering a sordid and racist history of nuclear testing and mining crossing South Australia we headed north to Tennant Creek where we met with Warlmanpa Traditional Owner Dianne Stokes and many other Elders who had been fighting the Federal Government's plans to build a nuclear waste dump on their land for almost a decade.

2014 was an inspiring journey, after which many of the crew from the Tour went on to organise fundraisers, parties and public events in Sydney and Melbourne to increase awareness and raise badly needed funds to support Beyond Nuclear Initiative campaigners and Traditional Owners in the lead up to their Federal Court case.

This year, following the historic win at Muckaty (the community defeated the dump proposal in June 2014), the focus of the Rad Tour has shifted to new horizons. The recent exploration of sites in Western New South Wales for rare earths and uranium mining, and the potential of nuclear expansion in South Australia under the recently announced Royal Commission, has put nuclear power and nuclear waste back on the political agenda. Plans are being made to ensure this Rad Tour has an even bigger impact than last year.

Starting in Melbourne we will journey up the east coast to New South Wales and visit the abandoned nuclear reactor project at Jervis Bay before visiting Australia’s controversial and only reactor at Lucas Heights. Then we'll head west to meet with communities in Dubbo and Broken Hill and hear about what they are doing to combat the development of new mines in their communities. We will then explore some more nuclear history at the disused uranium mine at Radium Hill before witnessing the contentious method of in-situ leach mining at the Beverly 4 uranium mine in South Australia.

The Tour will visit BHP Billiton's Olympic Dam uranium mine at Roxby Downs, the largest uranium deposit in the world. The mine is a long standing environmental and social disaster and BHP plans to trial the contentious acid heap leach mining method this year. Continuing south to Woomera we'll hear first-hand accounts of the British nuclear bomb tests at Maralinga and Emu Field from nuclear veteran and whistle-blower Avon Hudson. We'll stop by Nurrungar, the desert surveillance base that closed in 1999, before arriving in Adelaide right in time for the Students of Sustainability Conference, and onwards back to Melbourne.

If you’re considering coming on the Rad Tour as a first timer, or want to get back into nuclear-free campaigning, this is the year to get on board. It’s going to be a trip of action, with skillshares, protests, marches, strategy meetings and a lot of collaboration cross-country. We are already making plans to cause a stir in each community we visit to make sure that politicians in the cities know that Australians do not support a nuclear future.

Before my experience on the Rad Tour last year, I had little knowledge of the nuclear industry in Australia and came with little campaign experience. I found it an amazing way to learn about a dark and often undiscussed part of Australian history, experience the power of issue-based campaigning, and become part of a passionate and powerful movement.

If you’re looking for a great way to travel to the Students of Sustainability (SoS) Conference in Adelaide from any of the northern states, come with us! You'll get an amazing insight into issues that are unfolding right now, and knowledge that you can share with many others at the conference. The ACE Collective are planning to get together a small crew to make noise, make art and bring public attention to what’s happening in the nuclear industry while we're in Adelaide too. So if you’re coming to SoS we want you on the Radioactive Exposure Tour too!

Jemila has been campaigning with the ACE Collective since May 2014 after joining the Radioactive Exposure Tour from Melbourne to Muckaty. In 2015 she is due to finish up her studies in community development and complete a study in relation to policy and public opinion throughout the Muckaty campaign.