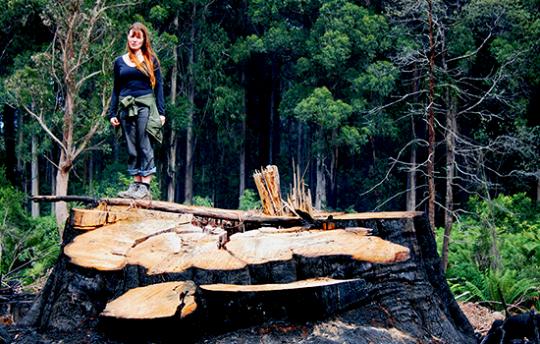 Why must it take a tiny environment group to force a government to obey its own laws on threatened species? Jill Redwood wonders what happened to the Victorian Government's morals.

As I write, the bulldozers and chainsaws are brutalising another superb stand of ancient forest not far from where I am just out of Orbost, south-eastern Victoria.

Those trees have stood for 600 years, sheltering and feeding generations of greater gliders and powerful owls; the lush understorey of ferns and blanket leaf have kept delicate lichens and mosses damp and cool in the hottest summers over the millennia. Liquid eyed marsupials will be huddling terrified in their hollows as these giants crash and splinter in a sickening thud that shakes the earth and shocks the heart.

After this brutality, the remaining vegetation is deliberately incinerated with a ring of intensely hot fire. Nothing escapes. It's all part of the 'sustainable forest management' lie that our governments feed us, hoping to hide the reality with a curtain of pleasing language.

We now have the absurd situation where our various governments acknowledge that many native wildlife and plant species are teetering on the edge of extinction, but the assistance offered is little more than recognition and shallow sympathy, laced with lip service and PR spin. The relentless winds of development and logging exploitation blow tough on these exquisite wonders of nature and evolution.

East Gippsland is a prime example of this situation. It has been described by Professor David Bellamy as "the most diverse area of temperate forest I know of on Earth". This small ark — just four per cent of the state — supports seven to ten times more threatened species than any other area of the state, making protection measures here vastly more effective and urgent.

The Victorian state government has been sued four times in recent years over environmental issues. Environment East Gippsland has initiated three of these legal actions and not lost a case, although one has been settled out of court and another is likely to follow suit. The government and its logging agency VicForests agreed to abide by their own laws after being forced to the steps of the Supreme Court.

Why, in a developed country should small regional volunteer groups, which run on a meagre budget, be forced to take on the behemoth monster that is the government? The answer is that our democracy is a façade behind which vested interests and large exploitative corporations call the shots.

Our latest court challenge has resulted in the government committing to prepare plans for saving a small sample of four species that are diminishing as their homes are logged and burnt. But there remains 370 others struggling to survive an endless onslaught from land clearing, logging, development, burning, grazing and mining. We don't know their numbers, whereabouts or condition as the government is taking no responsibility for monitoring their situation.

The Auditor General's report of April 2009 was scathing of the way the state's Flora and Fauna Guarantee Act is administered. It said: "At the current rate of progress, with existing resources, it will take a further 22 years for the department to complete action statements for the 653 items currently listed as threatened".

That was before Victoria's Coalition Government sacked eight tram-loads of scientists and biodiversity staff and axed $130.6 million from its environment department.

Yet Department of Environment and Primary Industries senior minister Peter Walsh's media department tells us they are working hard to protect species. Minister Walsh's meaningless reassurances are just that. They have no legal teeth. The biodiversity and land management sections have been reduced to an ineffective shadow of what it once was — an overworked handful of token staff remain.

As a result of EEG's legal challenge, the beautiful glossy black cockatoo finally had a draft action statement drawn up last month after waiting 18 years on the threatened species list. But Minister Walsh's staff have found a loophole — we now learn that although the plan itself is a legal obligation, it doesn't need to have concrete protection measures. The language does not bind anyone to do anything. For example, to 'protect identified nesting trees' won't ever happen if no one is given that task of looking for them. Nudge, nudge, wink, wink.

The 18-year delay in producing an action statement allowed continuing clearfelling and burning of the glossy black cockatoos' habitat. This has almost certainly meant its Victorian population is even more precarious. Its population could in fact now be critically endangered in this state. Its belated action statement must be unambiguous and clear as to what actions must be taken to protect it; how it is intended to do this and with what resources.

We do not live in a debt-ridden developing country. We have one of the strongest economies in the world and a most remarkable and diverse array of Australian plants and wildlife. There is no excuse to be flicking them into the extinction pit for the sake of a muscle bound industry's profit margins or the political expedience of a government devoid of morals.